Before we can even shake off our sea legs from the Blue Cruise, we have already arrived in Olympos. It partly reminds me of Kabak Valley, especially as soon as our Dolmus (mini-bus) begins to take us down a rugged, windy track and we are dropped directly outside our accommodation.

Olympos is a popular beach spot for local tourists, especially since it’s only an hour away from major city Antalya.

Much of the accommodation along the main ‘strip’ are all similar versions of each other, they’re all rustic style tree houses or bungalows. It’s cool. It gives the whole place a very alternative feel. We’ve checked into Bayrams Tree Houses, one of the most popular spots apparently. Straight away you walk into the huge common area, filled with benches and decking areas filled with pillows, all covered with luscious trees. The friendly manager, whose name I sadly can’t remember, offers to upgrade us to a bungalow for free –this is good news because the tree houses are more basic than we imagined and only have a small ceiling fan. The bungalows come complete with en suite, air conditioning and feel a lot more secure.

Russell and Sarah, a couple we met on our Blue Cruise, have also checked into Bayrams for the week, so we spend most of the week together at the beach and generally doing more relaxing… yeah it was real tough. I was desperate to make the most of the beach though, because I had an epiphany where I realised that after almost a month along the Turkish coast, this was our last ‘beach’ stop before starting to head inland, then to Germany, then to the UK. I am not ready to say goodbye. My hot tip for Olympos beach -get there early. We’d normally arrive before 10am, and walkway and ruins would be near empty and the beach very tranquil. Come 1-2pm when we’d head home in search of lunch, it was much more busy and the walkway was much more difficult to navigate with a lot of people stopping to take photos and generally stand between you and your lunch.

To reach the beach from Bayrams was about a 15-minute walk, and you actually need to pay entry –but it’s not very much, especially if you buy a pass which includes multiple visits. This is because en route to the beach are some amazing ancient Lycian ruins. They are untouched and surrounded by wild forests, so it’s kind of eerie but also totally unique, it feels like you’re walking through an abandoned city –which in a way you are. Daniel and I kept planning to properly exploring, as there’s a number of trails you can take, but unfortunately we never got around to doing it justice, something I somewhat regret.

One activity we did make sure we took part in was an excursion out to the Eternal Flames, or ‘Chimaera’, in neighbouring town Cirali. Usually organised by your respective accommodation, buses go nightly to the slopes of Mount Olympos, which is about an hour away. From there, we were handed torches and had to walk up a very basic walkway to reach the flames. The torches were absolutely essential, as there is no lighting along the ‘path’, and I was still managing to trip on rocks and just about anything else. The walk up hill was tough, and is about 20 minutes (and we were walking quite fast to maximise time with the flames). About halfway up and dripping with sweat I was seriously wondering whether this was going to be worth it, as I had read a few blogs which had described the historical flames as very underwhelming.

We reached the flames and tried to catch our breath. I wasn’t underwhelmed, but I suppose I could see where those few people were coming from. At the end of the day, they are just pockets of flames caused by methane, but it’s much more fun to buy into the more fun, mythical stories of a fiery monster. Also, apparently the size and power of the flames can vary greatly depending on barometric pressure, and I think we must have luckily gone on a good night. The highlight though, was toasting marshmallows and handing out the extras to other passers by. Toasting marshmallows while at another flame there were people brewing tea, one guy was even playing guitar. It was all very Kumbaya. 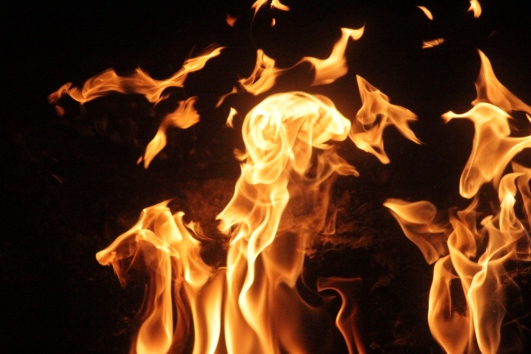 One thing which is super important to remember when visiting Olympos is to make sure you bring enough cash for your stay, as there are no ATMs anywhere. You shouldn’t need too much cash anyway, but there are quite a few cool markets that sell some interesting clothes and jewellery. When it comes to food though, usually your accommodation includes breakfast and dinner so you don’t need to worry too much about that.

Bayrams put on quite the spread every morning and night. By now, to be honest we were beginning to tire a bit of Turkish breakfast. Yes, at first it was novel, fresh and one of the more healthier national breakfasts we’ve encountered –but after a few weeks you begin to get sick of the sight of olives, feta and boiled eggs in the morning. You begin to crave bacon more than ever. So although Bayrams has all the makings of the traditional brekkie, it also had…AN OMLETTE STATION. And not only an omelette station, you could ask the friendly chef to also make scrambled eggs! As I’m writing this now, I can see it sounds slightly ridiculous to have gotten so excited by an omelette station, but honestly, at the time, it was exactly what we’d been needing. Dinner was no exception either, with trays and trays of delicious food ready to tempt you. There was usually only one meat option, the rest being different types of baked vegetables, chickpeas and rice, but every meal inevitably ended with all of us being hardly able to move.

OMG, on the topic of food, I almost forgot to talk about another unmissable part of Olympos. You can’t walk for two minutes without finding somewhere that is selling this delicious delicacy. I saw them everywhere and when I finally bought one for the bargain price of $5AU it was everything I hope for and more. It’s ice-cream served in a honey melon. Bam. Amazing. So simple yet so unbelievably delicious and refreshing on a hot day in Turkey. Russell, Sarah and I went to a place which was only a few doors down from Bayrams, because we’d heard whispers of home-made gelato, and it did not disappoint. Apparently they even make the gelato a little ‘stickier’ than normal, and something about this goes really well with the fresh melon.

All in all Olympos was a great follow up to the highs of our Blue Cruise, and I’m really glad we didn’t head straight to the frantic city of Antalya. It was a great chance to hang out with some friends we’d made on our boat, Russell and Sarah, plus Brogan who was staying just down the road in another pension.

Now, onto Antalya for only a couple of days before heading to central Turkey for something I’ve been looking forward to for a long time –Cappadocia