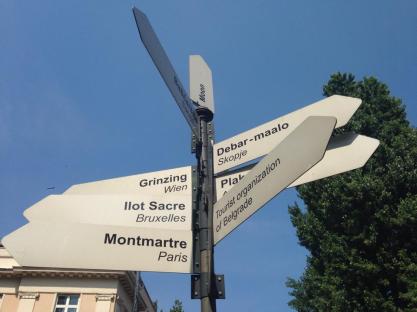 I think in only a few years Serbia’s capital Belgrade is going to be ‘the’ destination city for a wave of young travellers all over the world. It’s got the grit of Berlin but then also the party atmosphere of Barcelona. It’s also got some amazing restaurants, a city where you can eat like a King but at a fraction of the cost.

We arrive late in the afternoon at Hostel Bongo, it’s in a really good location but hidden down a small alleyway, behind a 24-hour Greek kebab shop. Could be handy later down the track. By ‘later’ I mean Saturday night and by ‘down the track’ I mean after 3am.

Hostel Bongo seems really cool, and absolutely immaculate. You’d think it was only a few months old judging by its spotless nature, but the staff tell us it’s well over a year old. That’s another point, the staff are also really, really sweet and very helpful. It seems to be only females, a group of about 5-6 young women who definitely help it to feel as if you’re just staying at a friend’s share house for a few days –it also probably explains why it’s so clean and organised.

Belgrade definitely doesn’t bear as many physical scars from the troubles of the 90s as its neighbour Bosnia-Herzegovina, although on the outskirts there are a few buildings that have been left deliberately in disrepair and abandoned, a reminder of the NATO bombing of Belgrade in 1999. There are plenty of organised tours which will take you out there, or else you can wander down yourself.

At the risk of sounding like a pretentious bearded hipster on Instagram, I’m probably going to spend too long on this post talking about food. We’ve realised now that Eastern Europe offers value for money for Aussies like no other area we’ve ever visited, but the quality of food it can buy you here is incredible. On our first night in Belgrade, we walked about 20 minutes out of the centre towards Terminal Restaurant –meant to be one of the more high-end places in town. We were not disappointed, we had entrees, mains and drank cocktails all night, and the bill was less than $70AU. Plus, the food was outstanding –the only thing that’s still a little bit hard to get used to is the habit of Europeans to smoke everywhere even inside restaurants.

There are plenty of sites to see and snap in Belgrade, but this isn’t the charm of the city at all. Walking around the city you’d almost swear you were in Barcelona, Berlin or even Budapest (I promise I’m not just randomly listing ‘B’ cities). We did a walking tour, but to be honest it was kind of underwhelming and offered info you could really easily find yourself. You’re best off speaking to your hostel/hotel staff to get an idea of the best places to see. The options for shopping are far superior to what we have back home in Perth, on every corner there’s another cool, small bar or a restaurant offering world class food with prices you feel surely can’t be correct.

One thing which is seemingly on trend but a little expensive anywhere in the world is ‘clean eating’, especially those places offering ‘gluten free’ this or ‘vegan’ that. But we sought out local haunt ‘Gnezdo Organic’ on the promise of some great, healthy food. This was for lunch, but we still managed to squeeze away a main each, plus a dessert each, and a pitcher of homemade lemonade. Daniel had a curry with brown rice, while I had a dish which I still have dreams about to this day; pumpkin risotto topped with zucchini rolled in goats cheese. So. Damn. Delicious. Then to round it off while Daniel went for the classic dessert of chocolate truffles, I opted for the only other dessert option, which was chia pudding with mango, blueberries and raspberries. Heavenly, and so fresh. Gnezdo is a bit hidden and has a warehouse feel to it, so you could almost mistake yourself for being in a trendy inner city Melbourne or London neighbourhood. Like I began by saying, the nature of the food meant it was slightly more pricey than the average restaurant or café in Belgrade, but my main was only 850 dinar, which is only around $10AU so I really can’t complain with that. 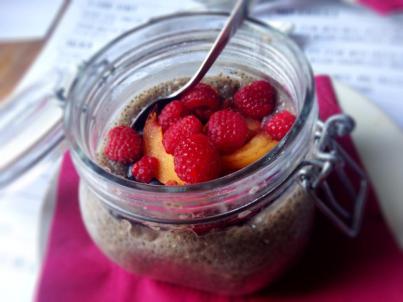 The last foodie place I will mention was one I actually booked a week or so ahead of time as a belated birthday present for Daniel. Toro Latin Gastrobar looked like everything we ever want in a restaurant; lots of tapas, cheap cocktails and a prime location. It’s located on the waterfront, in a line with various other eating houses which all looked just as trendy as each other. We can’t confirm, but the big building looks like it used to be an old passenger terminal –now a perfect piece of architecture to house the city’s hottest restaurants and bars. We’re warmly welcomed to Toro and personally greeted by one of the Managers himself, Sasha. The evening that follows was one of most fun and delicious experiences not only of Belrgade, but of the past four months of travel. The service was without doubt the best we’ve received, plus the Mexican style tapas where amazing. I think the guacamole with pomegranate was a favourite, as well as their raspberry mojitos. If things weren’t going well enough, Daniel got a lovely surprise when after the waiter gave us a round of free drinks, he then brought out a complimentary dessert platter for his birthday. So not only did Daniel get to celebrate his actual birthday on a boat sailing through Croatia, he also got an amazing meal filled with endless cocktails and a decadent dessert special. Bit greedy if you ask me.

On the way home from dinner we stopped in at the famous KC Grad, in the rundown but very popular neighbourhood of Savamala. KC Grad is known as a creative hub, a large space used as an art gallery, bar, music venue, almost anything! When we passed by for a drink, the inside was being used for their weekly Tango lessons. I would definitely say that any trip to Belgrade would not be complete without going to KC Grad to see where the alternative, creative scene began here.

Belgrade was really a big shock to me, I had heard rumours from other travellers and hostel workers that it had a lot to offer, especially to young people, but I never really knew how much until I visited myself. Between their famous ‘barge clubs’ on the river and hipster neighbourhoods, you really feel as if you need to shout from the rooftops about how cool this city is –so that all the people spending a fortune in Paris and London can hear you.

For now, we are actually meant to be heading on to Sofia en route to our Workaway, but unfortunately there’s a snag. Daniel broke a tooth in Sarajevo 10 seconds after being cursed by a gypsy (I wish I could make this up!), and is in the middle of having a ceramic crown fitted. So now we are getting back on a bus to head back to Sarajevo and hopefully Dan can finish his treatment, before then we rush to get to Bulgaria in time to start out Workaway. Pros of dental treatment in Bosnia: it’s really cheap. Cons: The dentist recommended to you by your hostel is a couple of kilometres on the fringe of the city and is located round the back of a kebab shop.