We arrived in Brussels a bit tired, sore and weary, not from getting up at 6.30am to get to the airport, more from the general RyanAir experience. I’m not going to complain too much about it though, because you get what you pay for –and we did not pay a lot.

We’re back to another AirBnB, a nice change after staying in shared dorms in big hostels for of the last two weeks. The apartment belongs to Argentinian expats Carlos and Alejandra, completing Masters in Art at the University. They’re an interesting couple, really friendly and happy to help us out with directions and advice for their new home city. It’s definitely the smallest AirBnB we’ve done, it’s a small apartment for two people, but with all four of us (the two of us in the small loft mezzanine floor), we’re living on top of each other a bit. But it’s cheap, and apart from the size, there’s not much to fault at all with the place.

The centre of Brussels is about 15 minutes away on a direct metro line, and when we step out of Centraal Station/Gare Centrale, it’s wonderfully clear that we’re not in Spain or Portugal anymore. The style of buildings and architecture is completely different, and the people seem friendly but quieter than their Iberian cousins. Plus the streets are literally filled with chocolate shops or pubs/bars. Bonus.

We kick Brussels off with a bang, having bought tickets to see Circa Wave several weeks ago –we’re both pretty excited to see some live music for the first time in a while. To line our stomachs we go to 9 Voissons for dinner, it was great! Classic international dishes but also some Belgian favourites –although we are still having some trouble adjusting to the inflated prices compared to Spain/Portugal. 15euros for a main probably isn’t offensive, but it is when you’ve spent over a month being spoilt by 1euro beers, free tapas and cheap seafood. At least the food lived up to it!

The gig was amazing, so afterwards when we were feeling a bit drunk on life and maybe beer too, we made a bunch of Belgian pit stops on the way to the metro home. Firstly Fritland, a mecca for the lover of frites. Then, we definitely weren’t planning to, but the chocolate shops were too much, I could hear the sweet whispers of cocoa caressing me as we walked along the cobblestones. So all of a sudden we found ourselves in a shop selling the most delicious looking and smelling chocolate you’ve ever seen –but every chocolate shop in Brussels is like this- however we managed to control ourselves and only walk away with four different truffles. I think Brussels is going to be a long lesson in self-control.

After spending a long time tossing up between Bruges, Antwerp and Ghent –we only really have time for one- we decide to spend a day in Ghent. It’s only about 40 minutes on the train, but you feel as if you have arrived in some sort of other world. Where it’s very peaceful, there are a lot of bikes, and quite a few hipsters too. My kind of place I think. Ghent is in the north of Belgium, and falls in the Dutch part of the country, so here most people are speaking Dutch rather than French –which is the opposite of Brussels. The day is spent mainly walking around, eating some more frites, trying some more Belgian beer –you get the general gist.

For the most part, Belgium was great –although I think I’m glad we only stayed for a few days, any longer and our wallets and waistbands would not have thanked us. The beer and chocolate was really exceptional, a far better tourist attraction of Brussels than the weird Mannekin Pis statue. What the.

Now onwards to Amsterdam to join the wave of drunken orange to celebrate Kingsday on Monday. 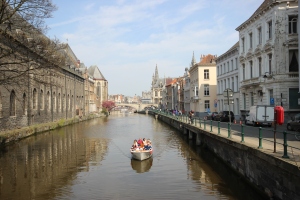